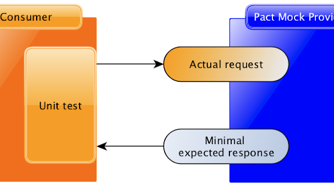 In this article we will discuss working with Contract Testing with Pact in C# .NET language binding.

Before getting into Contract testing, lets first discuss the problem we have with Testing pyramid layers like Unit testing layer, Integration layer and E2E layer.

In order to overcome all the problems, contract testing comes into picture and looks very promising.

In general, a contract is between a consumer (for example, a client that wants to receive some data) and a provider (for example, an API on a server that provides the data the client needs).

Here is how Pact works

Here is the complete video of the above discussion

Thanks for reading the article and watching the video !

Please leave your valuable rating and comments on the video and let me know if I need to add any details in the article.

Sorry, no Tweets were found.